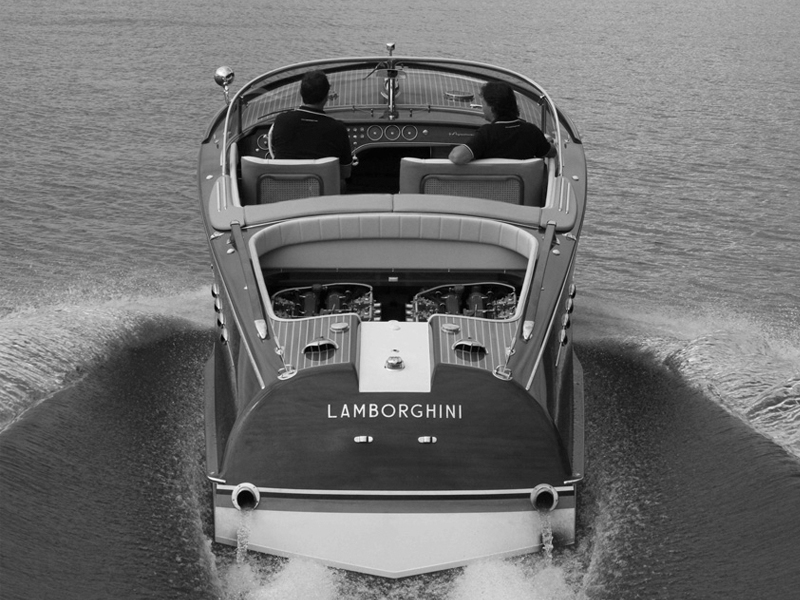 When you hear the word “Lamborghini,” you tend to think of land, not water, yet the car maker has a page in one of the most famous chapters of boat design. After a three-year effort, Dutch Riva has announced the successful restoration of a piece of maritime history: Ferrucio Lamborghini’s Riva Aquarama speedboat.

In production from 1962 to 1996, the Riva Aquarama was the crowning achievement of the darling of the Jet Set, Italy’s Riva boat works. Founded in 1842, Riva started out making ferries, but soon graduated to racing boats. After the World War II, Carlo Riva saw the company’s future in luxury speed boats and almost came to blows with his father over his vision. Making a hallmark out of high-end craftsmanship, he pushed his meager capital to the point of securing six V8 engines from the American Chris-Craft company, who wanted to sell him a minimum of fifty, but by being economical with the truth, Carlo managed six by claiming that Italian law would only allow him to import six engines at a time and there was nothing he could do about it.

In production from 1962 to 1996, the Aquarama was the most famous of Carlo Riva’s luxury designs and has the reputation of the Ferrari of the boat world, which is ironic. It takes its name from its wraparound windscreen, which is reminiscent of the Cinerama film format that was popular in the 1960s.

With a hull inspired by the American mahogany Chris-Craft runabout, the journalist Jeremy Clarkson referred to its design as “a jaw-dropping, eye-watering, hand-biting man-made spectacle.” It has elegant, smooth lines that make it look less like something built, than sculpted. There’s no fiberglass here. The hull is made of deep, rich wood with a lighter wood deck. Apparently Carlo Riva said he wouldn’t even tolerate a plastic toilet seat. It is also a wonderful bit of engineering that has the reputation of being almost impossible to roll.

Inside, the cockpit is all white and turquoise leather. Riva didn’t stint on the craftsmanship, having his workers spend over 3,000 hours on some boats and using 30 microns of chrome on his boats when Italian cars only got 1.5 microns. With all that, it isn’t surprising that they sold for £250,000, which is what a restored one costs today.

The timing of the Aquarama was fortuitous, because it came out just as the Jet Set came on the scene, and the rich and famous were flying about the world looking for toys. In all, 769 boats were built and ended up in the hands of the likes of Peter Sellers, Prince Rainier of Monaco, and Ferrucio Lamborghini among many other celebrities.

Hull No. 278 was built in 1968 under a commission by Ferruccio Lamborghini, the founder of the Italian sports car company that bears his name. It took three months to build and Lamborghini didn’t just sit back and wait for his boat to show up. Dissatisfied with the standard V8 engine, he took a pair of 350 bhp 4.0 V12 Lamborghini engines from the Lamborghini 350 GT and adapted them. This made it not only the fastest Aquarama ever built, but an Aquarama with the heart of a Lamborghini.

Lamborghini’s Aquarama eventually ended up out of sight under a boatyard tarp. Eventually, a Dutch Riva collector found it and three years ago it was handed over to Riva World in Uithoorn in the Netherlands, to put it back to rights. Not surprisingly, the woodwork needed some attention. It was repaired, sanded, and 25 coatings applied. The chrome work was polished, all of the buttons and switches were disassembled and restored, and the seats were reupholstered in new leather to match the old.

To make sure that all the elements were correct, Sandro Zani, the owner of Dutch Riva, made frequent trips to Italy to check on details. This was especially important because new engines were needed to complete the restoration.

“One of the two original engines from the Riva can still be seen in the Ferruccio Lamborghini Museum in Italy, but unfortunately wasn’t available for sale for this project,” says Sandro Zani. “That is why we bought two other V12 engines, one of which in the US, and converted them so they would be fully suitable for use in a boat. Thanks to the Ferruccio Lamborghini Museum, we were allowed to disassemble and re-create various original parts of the original engine in the museum. In addition, Lino Morosini, who 45 years ago was head of the Riva engine division and one of the fathers of the Aquarama Lamborghini, provided us with additional information with which we were able to adapt the twin V12 powerhouses, water-cooled via specially designed closed circuit, so they were completely in line with the original specimens.”

The restored Riva Aquarama sports two Lamborghini 4.0 V12 with six twin Weber carburetors punching 350 bhp, making for a top speed of 48 knots (55 mph, 89 km/h) compared to the 40 knots (46 mph, 74 km/h) of V8 Aquaramas. The restoration team also had the input of Lamborghini’s former test driver and developer, Bob Wallace, who passed away last month, age 75. With his help, the engines were adapted for marine service and made to rotate in opposite directions to eliminate prop walk. After restoration, the Aquarama was taken to Italy and put through its paces under the eye of its creator, Carlo Riva on Lago d’Iseo, where it was built.